We finally had a day that didn't promise rain or snow, so was the chance we were waiting for to do Isabelle's walk she had planned.  Evie had seen what was going on, so wanted to get in on the walking planning front - and had planned a 2 mile walk that would barely have us break a sweat.  Now the problem was the peak she had picked (Rannerdale Knotts) was also one we could take onto the end of Isabelle's walk.  This would clearly devalue her planning, so virtually all of this walk was take up trying to get Evie to accept that we might do Rannerdale Knotts on this walk... 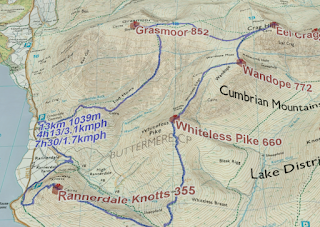 It really was a marked change from the rest of the week - calm and warm.  I even found an extra free car park on the way to the one we had picked out.  And then had to reverse back out again. 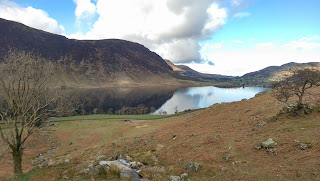 The view over Crummock Water was great, almost not quite enough to distract everyone from the relentless climb up to Grasmoor.  700m of ascent straight from the car park, covered in under 2 miles of walking but taking 2 1/2 hours!  Slow going at the back, watching Caroline stride away.  Still, a lot better than having to persuade Evie to take another 20 steps, as we did a few years earlier... 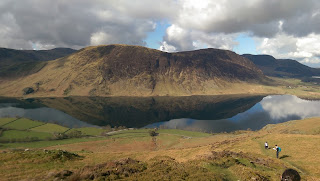 Finally it flattens out near the top.  Robinson is in the background, still snow covered, with the ridge between Whiteless Pike and Wandhope between it and us.  Here Isabelle is walking with Poppy, with Evie just behind. 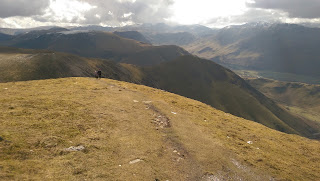 All smiles at the top of Grasmoor, the high point for the week. 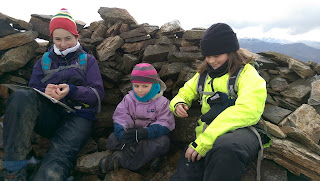 From here it's a really easy stroll over to Eel Crag.  Well, it's fairly open, even if 130m down and 110m up isn't that easy for everyone or motivating for the likes of Evie.  No hint of scrambling here. 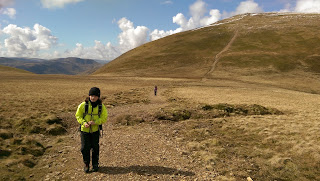 Caroline at the top of Eel Crag, Well actually Crag Hill on the map, since Eel Crag is to the north, but this is the GPS for the official Wainwright, which is what we're really counting... 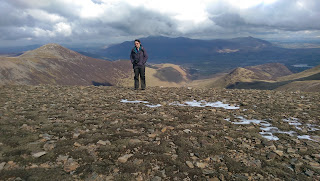 More at the top of Eel Crag. 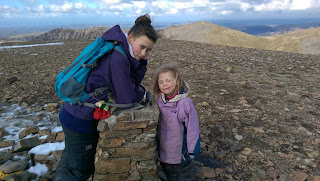 A lovely smiling Evie, although Caroline looks less convinced. A snowy Robinson is easy to pick out in the right hand background. 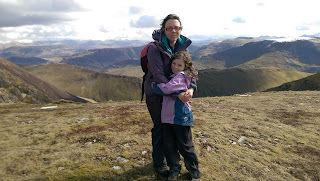 The walk over to Wandhope is one of those that you just don't want to get that close to the edge. 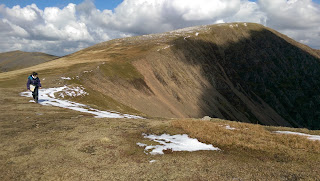 The top of Wandhope, Robinson far left, and Newlands Hause mid left - you can see the road appearing over the crest and going down to Buttermere village.  Buttermere itself is also just visible in the centre.  At this point I revealed to Evie that I did actually have some fudge - she had been going on all week that the megre walking rations of mini chocolate eggs were insufficient and she really wanted some fudge.  Sorry, did I give that enough emphasis - Evie wanted fudge.  Anyway, on the last day we relented, and brought out the fudge for all - the effect was miraculous as we all sped up with the sugar rush! 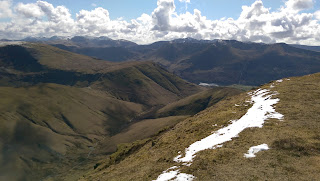 The top of Whiteless Pike, with the route up to Grasmoor visible running diagonally up the ridge in the center. 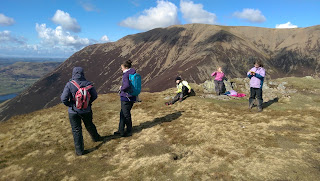 Evie, frustrated that the fudge had all gone, made sure she was the one handing out the eggs. We finally managed to persuade Evie that we were going to do Rannerdale Knotts as well, which was a really great finish to the week.  Superb views, not that high, and a great Poppy sized path. 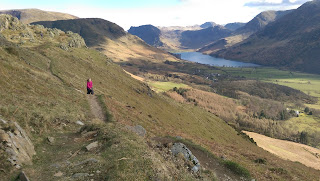 One the way down we had a brief hour of family harmony, as the girls made up a very complex and evolving story.  Poppy was the Queen, Grace was the butler, and Evie and Isabelle were the naughty princesses that were always going out on exotic and expensive holidays. 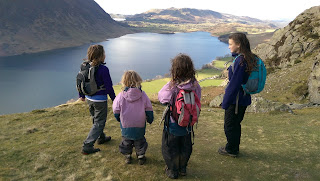 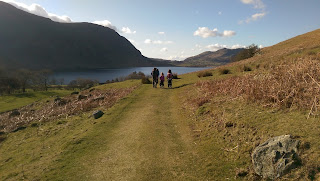 Just to point out how great the location was, this was my view from the sofa, beer in hand, as Caroline read Poppy a bedtime story, with Maiden Moor catching the last rays of the sun. 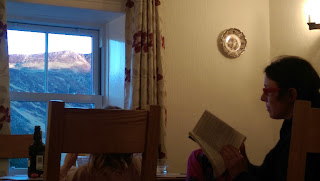