The second walk we did from the house: another one where we had an ambition to do the full horseshoe, but had the option after High Spy to come back along the valley.  That's what Caroline and I had done on a very wet and windy day in October 2013, when we parked at Little Town. 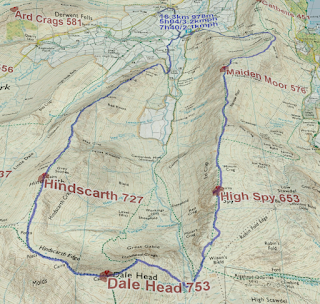 This time we walked across the valley from home, past the small car park at Little Town, and then up to Maiden Moor. Even Grace had remembered to bring her camera, and it was nice enough to take a picture! 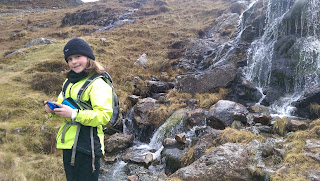 Hmm, what did I say about it being nice?  At the top of Maiden Moor it was snowing (again), hailing (again), and very windy. 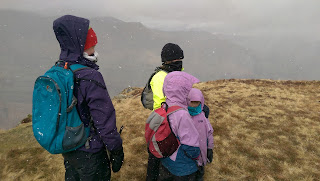 Still, shower fronts pass, and there were occasional breaks before the next one came through.  This was looking back towards Maiden Moor, with Bassenthwaite in the background. 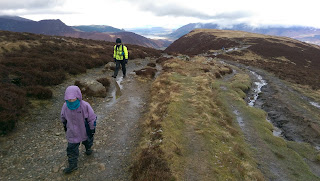 After several more sideways snow showers we made it to High Spy.  It was past lunchtime, with the best cover available the cairn at the top, so we hunkered down for a quick snack.  It's amazing how much less you eat when it's like this.  Grace's hat clearly shows the prevailing wind conditions. 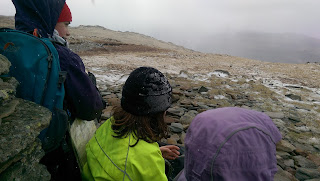 We reached the potential point to turn back at Dale Head Tarn, but a quick word of encouragement from Caroline and we were up!  If only it were that easy...  So, after lots of encouragement, threats, walking off and abandoning, holding hands and pulling along, etc. we made it to the top of Dale Head.  Luckily the weather had cleared, so we got amazing views down the valley - we'd walked up the right hand ridge in this photo, our house is near the clump of white houses to the far end, at the bottom of the fell side rising up. 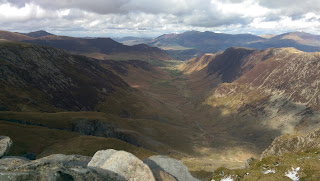 Caroline, taking one of many pictures, genuine evidence of sun hitting our faces! 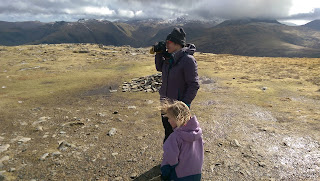 This is the cairn at the top of Dale Head - Grace (following on from previous walks above Wast Water) made the largest snowman she could with what was around, slim pickings really. 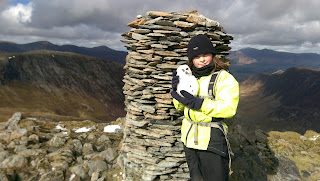 The reward for walking faster is you get to rest and wait for everyone else!  Isabelle and Grace sheltering from the wind at the top of Hindscath. 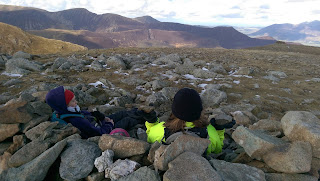 By this point in the week they really have photo fatigue, so getting a posed shot like this is quite rare.  Grace is even almost compliant, but withholding her face out of residual protest. 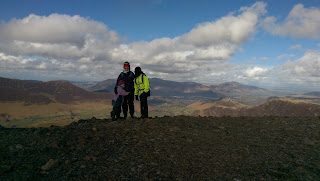 So the way back down was fun!  On the way up Caroline was easily the fastest, having trained in secret for weeks (well, doing the Cambridge Half Marathon), and Evie was typically lagging at the back.  However on the downhills the order was reversed - you can just about see Evie in the distance here, and over this kind of terrain Caroline was just about keeping up.  However, anything you need your hands for Evie would bound and skip and be away - Caroline would then become painfully slow! 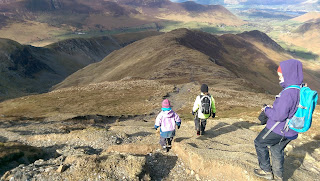 It's almost impossible to get photos to show some of the great paths, but this one almost gets it - there was quite a steep fell side dropping down straight off the path, which was pretty narrow and disappeared in places.  My real worry was Poppy, who was absolutely fine - she only tripped over a rock once on this path when she was distracted by me warning her to be careful...  This photo also shows Maiden Moor on the ridge to the right, and Keswick in the distance. 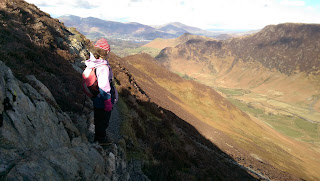 This was the longest walk with all the family we've done, at just over 10 miles, pretty impressive for Poppy at 5 1/2.
Posted by mcshane at 18:19