The next lesson to try looked appealing - very simple ingredient list, and interesting instructions about rolling out a whole pack of butter...  The fresh yeast was got from Arjuna Wholefoods on Mill Road.

First step was the dough, made in the kitchenaid, it took almost exactly 3 minutes to combine.  I chopped up the yeast after adding it to the flour before mixing, since it was in quite large lumps. 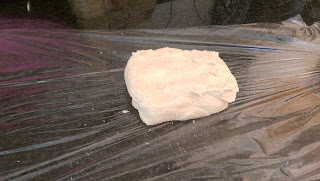 After the initial rolling out.  I had the target distance marked roughly, but probably should have rolled out a little larger.  I'm not sure what the comment at the end about 'sugar melting in the refrigerator' means, since at that point you've not added any sugar...  When rolling out and combining with the sugar it was definitely melting though - towards the end the dough was quite sticky and wet.  I didn't weigh out the sugar, I just kept on adding more at each stage with generous covering. 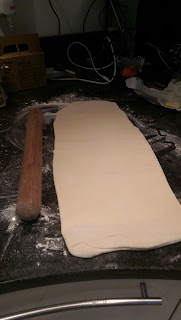 I didn't have enough proper rings, so improvised a little, which was fine.  I did then only target making 11, and even then they were a little under 10x10.  This made the folding in not work on some of them - better to a little over 10x10 for this size of ring. 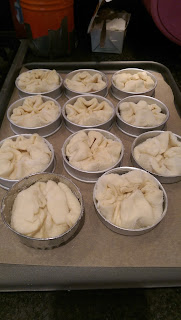 It took me a little time to realise that the photo in the book is of the underneath of one, even so I think mine were a little full - a few of the larger ones really came out of the ring too far.  So I think aiming for a little above 10x10 and aiming to make 12 or 13 would mean rolling out thinner and then not overfilling each one.  The greaseproof paper was very useful - the sugar spread between the rings when cooking and solidified - great to eat, although not very good for the teeth... 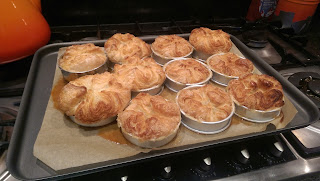 They really looked quite authentic though...  A little hard to take out of the rings, but with care they came out without breaking up.  They tasted absolutely wonderful - the kids weren't that impressed, but that just meant leftovers for us!  I took a few into work and people agreed that they were great. 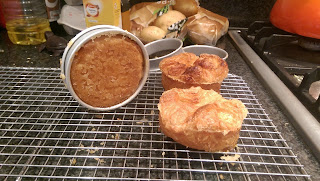 Some careful planning to be able to cook this on a very busy Saturday.  Made the cinnamon pastry and the pastry cream the night before, the choux pastry in the morning then the rest in the afternoon.

First off the pastry cream.  First time making this, and the result was pretty good.  The vanilla seeds were quite visible in the result, but it tasted good. 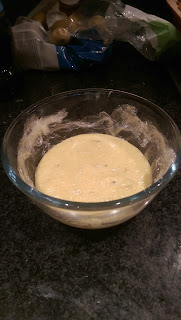 First attempt at the choux pastry failed - the mixture wasn't hot enough.  The butter had melted, but it hadn't started to simmer, and it never got thicker.  For the second go I read around on other websites about making choux pastry.  I made sure the mixture was properly simmering, and had the flour sifted onto a folded sheet of greaseproof paper.  With one had holding the hand electric whisk I was able to turn the heat off, then start whisking and added the flour in one go right away.  It thickened up straight away so needed very little whisking. 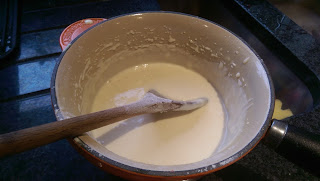 I used a piping bag and a tip that was advertised as 'size 8'  but had an opening of 12mm in diameter.  It just about made 32, and some of the puffs ended up too big.  I also made a big mess spooning the mixture into the bag, for the pastry cream and whipped cream I put the bag in a pint glass which worked a lot better.  Still, they looked about right at this point... 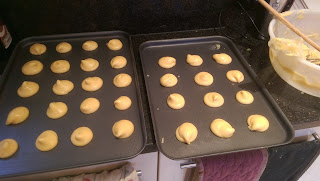 After cooking - miraculously they all rose and looked amazing!  Some were a bit big, and they perhaps could have had more egg glaze on.  I cut holes in the bottoms with a knife, then cooked them upside down for another couple of minutes, then stored in a box for the day.  They were still fairly crisp later in the day, but the next day they definitely would have needed heating up again. 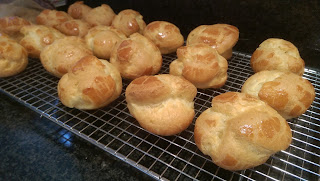 Now to make the bases.  I was using a 10cm diameter cutter, with rings that were 8cm internal diameter, the sizing worked really well.  I was left with very little wasted pastry, and some of the bases were too thick, so aim to waste a bit more... 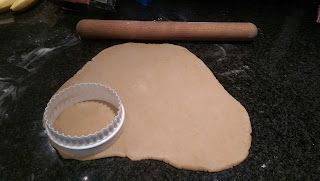 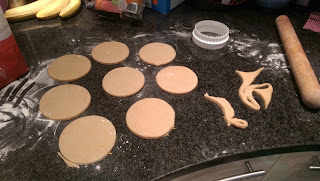 All in the rings, they were advertised as crumpet rings on amazon, but they were the right diameter.  Not sure whether they should have been taller, but there was enough depth after cooking. 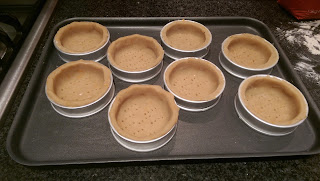 The sides had shrunk down during cooking, and the bases had risen up - I'd given another fork hole when cooking.  In the end it didn't matter too much that they were a bit curved up. 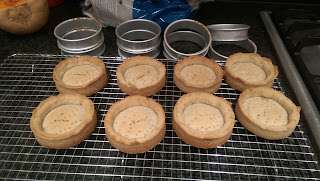 And finally the finished plates. Given the puffs were a bit big, the larger ones ended up being not much smaller than the bases, so one half I put a single puff ball on the base with cream around the sides.  The other bases had two puffs on.  All in all, I only had enough pastry cream to squirt some into 20 puff balls after filling the bases.  Even though the balls were big I was only putting a bit into each one, but clearly even this was too much given it should have stretched to 32, or I could have over-filled the bases. 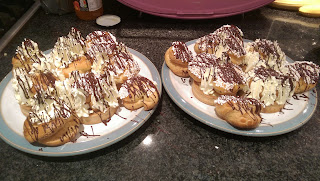 They all disappeared, although some of the bases were left uneaten.


Things for next time