Being on a roll with one a week meant that today was baking day again. Thinking that the kids would appreciate more this chocolate pie, this was the easier choice.

The pastry was fairly straight forward, using the kitchen aid for all of it (apart from a bit of hand mixing to make sure it had scraped all the butter from the bottom of the bowl after adding the egg).  I didn't have a pastry ring, so was going to use my trusty 9" loose bottom pie dish.  Rolled out fine, although seemed to roll out larger than needed when going for the right thickness.  Still, the off cuts went to making some biscuits with Poppy choosing the biscuit cutters. 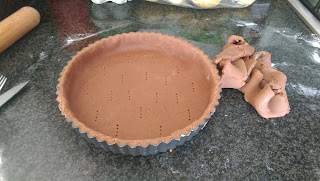 Hmm..  the typical slump down the sides did look like there wouldn't be enough space for the topping.  Plus my fork holes at the bottom weren't sufficient, so half way through cooking the bottom of the pie case was risen up with lots of hot air underneath, cue the three emergency tracheotomies visible here.

So on reflection, there was just about enough time to make some more pasty and chill for a couple of hours, then to line the case with greaseproof paper and use pie weights to fill up the middle.  The pasty now rose up slightly above the sides of the dish during cooking, but flattening back down after coming out of the oven.  This did mean it was harder to judge the cooking time, but then again the first time I pretty much guessed anyway, so no real insight lost. 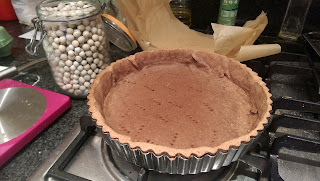 The extra case did mean that I didn't really have enough time to cool it, so made the mistake of taking it out of the pie dish and onto the cooling rack.  Not a really good plan, since it wasn't stable enough to do this safely.  Topping was fairly straight forward, leaving the kitchen aid on whisk for a while.  Still, filled with the topping it looked okay.  Not as 'brim full' as the recipe wants, but it wouldn't have fitted at all in the previous case.  So clearly we're expecting something inbetween, 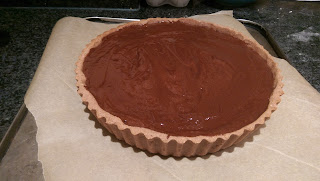 After cooling and serving it looked like this.  Very very rich, but really quite nice - apart from that we were too full from our Chinese New Year dinner to eat much...  Still, quite a bit left over for tomorrow. 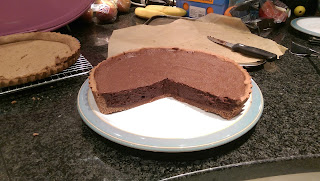 Things to remember for next time

First new recipe for a while, and a new basic/simple one to try. However never underestimate my ability to mess up...

Made the pastry, using the flexible spatula as suggested.  Not sure that a wooden spoon wouldn't have worked just as well. 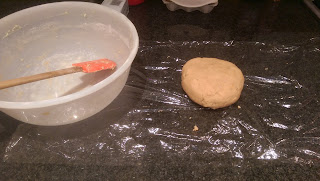 I own lots of pie weights.  Useful for this one...  Chilled for about 3 hours, was fine to roll out, although I did roll out twice - too big the first time, the second time bits of the walls were too thin, so needed bolstering up with some of the offcuts.  This worked fine.  I used a loose bottom pie dish rather than springform, which was fine. 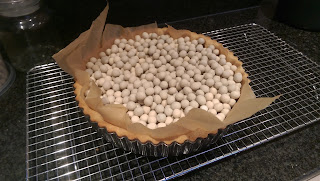 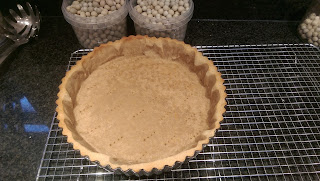 This is where it really went wrong.  I didn't add the cornflower carefully enough, so had lumps.  I used the hand whisk for the egg whites and they weren't stiff enough - use the proper balloon whisk and the kitchen aid next time.  I also spent time trying to remove lumps from the cheese mixture, which wasn't ever really thick enough - probably since lots of the cornflower was in lumps rather than evenly spread. 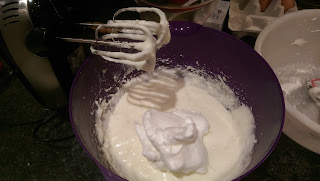 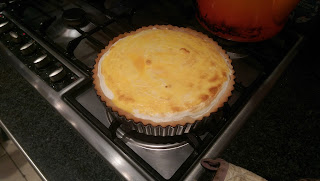 Middle wasn't really thick enough, tasted okay but not very cheesy.  I used Quark for the cheese, maybe something more cheesy next time. And fewer cornflower lumps.  Thankfully it was only for us rather than visitors...

Tips for next time:

Determined to make a better attempt I cooked this again, and it was much better.  I rolled out the pastry to the right size first time, and I used enough milk from the 300ml to mix into the cornflower, the mixture was quite liquidy and smooth - much more like the picture in the book when they are mixed.  When it came time to mix in the combination became thick instantly rather than needing time to cook, it didn't get much thicker during the extra minute or so on the heat. 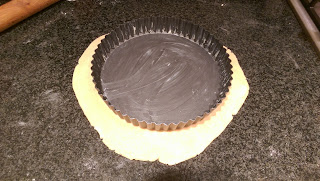 The balloon whisk got the whites stiffer, I stopped when they stopped getting any thicker...  The end taste was very similar (using ricotta for the cheese) so still fairly plain, but at least the texture was smooth. The topping is still quite soft, but noticeably easier to get a coherent portion cut than last time. 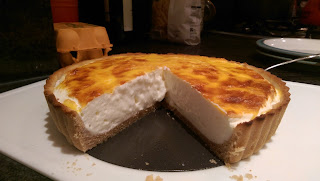