One thing I had tried to do for this week was involve Isabelle and Grace in route planning.  Isabelle had planned quite an ambitious walk, but Grace's was a bit shorter and lower, so given the weather forecast was supposed to be better at the end of the week we delayed Isabelle's walk and did Grace's.  I had hoped they would also navigate, and Grace did a bit but generally got bored and frustrated by the map blowing around in the wind.  For this walk we drove up Newlands Pass to Buttermere, then marked at the top of Crummock Water.  We had a chat to a guy out walking his dog at the car park, who warned caution at some of the walks given the conditions - I was very happy to listen but was confident that we were up for the challenge.  And like all the walks, there were easy ways to cut it shorter if necessary. 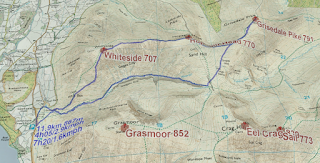 Across from the car park. we found the bridge to start our walk, then headed up the left hand path up to Whiteside, following the left hand ridge in this picture. 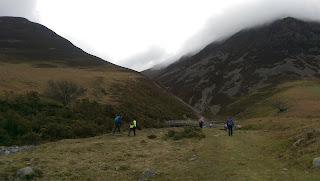 The climb up, just before getting into the cloud.  Grace takes a break, she really doesn't like having her picture taken, but consented for some reason... 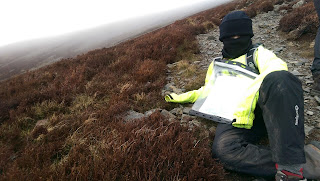 This was the top of Whiteside - a slightly uninspiring view 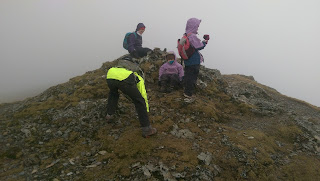 This is the ridge walk going east towards Hopegill Head. 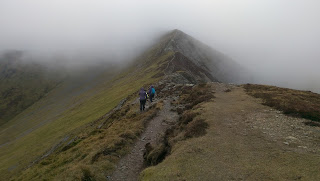 The top of Hopegill Head, and thankfully we hit a gap in the cloud cover to see the view north east - not many more mountains to climb in that direction.  I'm still amazed seeing Poppy and Evie in those coats, since we bought them early on when we first took Isabelle and Grace out walking. 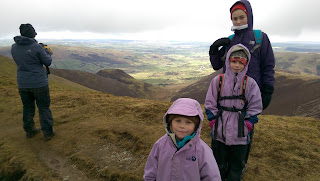 Grisedale Pike was the prize that awaited us, after we avoided the minor peak of Sand Hill.  A nice sit down was almost the reward we deserved! 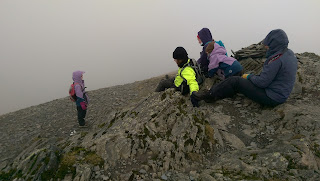 We had picked a nice gentle valley walk back along Gasgill Gill for the route back, however this was one of the many times we were reminded of the floods from 3 months earlier that year.  Large parts of the path had completely eroded, and left us no choice but to find our own way down.  Grace was leading the way walking along the stream and stones, we really didn't make much speed down here!  The worst part was when the stream was running fast with no obvious crossing points, both sides of the valley covered with thick heather and no paths of find.  I started to head uphill towards a path that was there somewhere up above, but Isabelle came to our rescue by finding a point where it was possible to get everyone across.  Generally getting Isabelle & Grace across is easy - Isabelle has long enough legs and a sensible head to find a crossing point (clearly taking after me), Grace just doesn't mind accidentally slipping and getting a soaking foot.  Evie enjoys it most the harder it gets, so the only problems are Poppy and Caroline.  With Poppy the usual method is for Isabelle or Grace to cross ahead, or stand on a rock half way, then I'll help Poppy over to them.  In extreme cases I just give in and carry Poppy.  Caroline usually needs about as much help as Poppy, although I refuse to carry her! 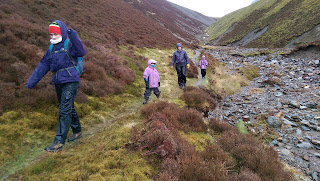 Still, we finally emerged from the valley, soaked and tired, and quite a bit later than expected.