Robinson in the snow

One obvious walk we had put off was to get Ard Crags and Knott Rigg - they were right above our house, and we had walked them three years earlier with Poppy in the carrier and actually walked right past the house we were now staying in.  However we knew that this walk was well under the kind of distance that Poppy was walking now, so it being saved for a (more) rainy day.  I had a large scale map printed out showing all the mountains we could walk: we sold Poppy on walking saying they were mountains, and have kind of neglected to point out the official definition of mountain...  Anyhow, Poppy was looking at this, and she suggested (in the way of one who has no idea of scale or contours) that we could go up Robinson as well.  I have to admit that I hadn't spotted this, but it really made a lot of sense - Poppy was also quite proud all day that this was her walk, 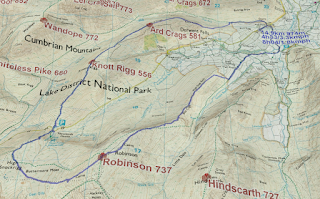 One this became very apparent from leaving the house - it had snowed quite a lot in the night.  Peaks that had a light dusting were now pretty covered, and even the lower peaks were white.  This is Evie at the top of Ard Crags, we had to endure more snow showers on the way up, but had another clear peak to take some pictures.  Behind is Sail (you can just make out the zig zag path we did earlier that week) and Eel Crag. 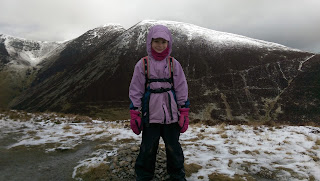 This is the top of Knott Rigg, with Poppy doing her best smile for the camera.  Behind is the route onwards towards Newlands Hause. The descent down grassy slopes was a great chance for the girls (well, apart from Isabelle) to practice running downhill as fast as possible - Grace was careful to be at the bottom to catch Poppy. 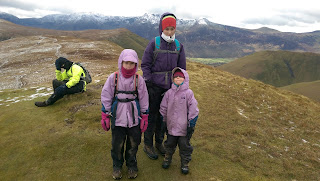 After a quick lunch stop we then climbed up past Moss Force and onto the wonderfully named High Snockrigg.  This had the distinction of being marked as a bog on the map, rather than just being an unofficial bog (as most of the fells are this time of year).  It was really quite wet, picking a path through really sapped the energy of the kids - even Isabelle was right at the back. 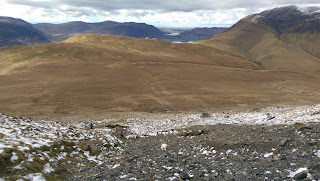 Still, this was the reward after another climb up - Robinson.  Here looking towards Dale Head on the right and Hindscarth (now looking very white) from the day before. 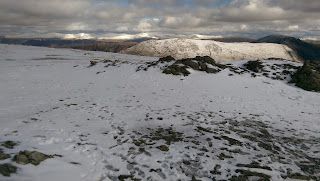 We spent quite a bit of time at the top - with Isabelle and Caroline mainly taking it easy, and Grace and Evie making snowmen. 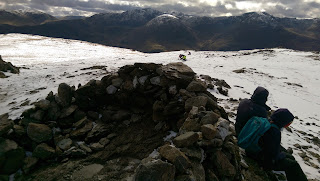 Twenty minutes later, and we have the results!  The hats did come home with us, but I'm hopeful that they lasted for long enough to raise a smile with other walkers out over Easter. 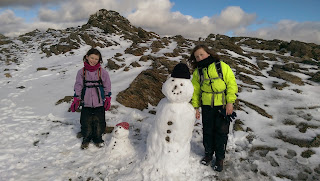 The long walk back from Robinson, as the snow ran out. 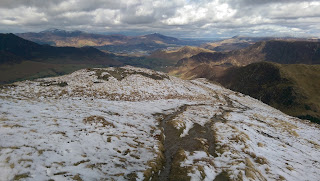 A great illustration of the kind of route down that Evie loves - I had no idea where she is at this point, and just have to trust that she doesn't bound off a cliff...  Caroline hates this and is typically at the back, generally slower than my helping Poppy.  It really won't be long until Poppy is racing Evie down. 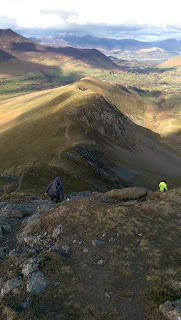 By now it flattened out, but this shows Evie's appreciation for the way down!  There was around another hour of walking after this photo, back to the house, for our latest finish time.  Due to the flood damage we had to take the road way back, rather than cross country over a missing footbridge. 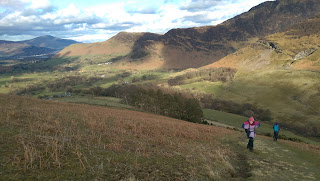