Grace had a school trip to the Lakes the previous December, staying at the Youth Hostel in Eskdale, and had done a very similar walk with her group.  This was a fairly short drive from us, and would pick up Slight Side on the way there.

We parked at the fairly small car park just off the road on the left, right where the path started that we wanted to take.  The farmer's wife came to have a chat as we got ready to set off, reminding us gently that we shouldn't stay overnight - she was very friendly, and even helped when we set off up the hill - pointing out that we were going in the wrong direction...

After the first section of climb, we rested for a round of rhubarb & custards.  This was looking back south towards Hardknott. 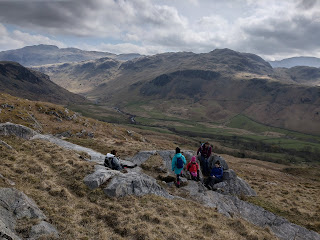 Setting off towards Slight Side and Scafell.  We initially headed a little too right, in an attempt to avoid the mass of sheep that was being expertly herded by the farmer & dogs.  They streamed past us, all sticking to the path, and beat us by miles to the fell this side of the climb up.  We even got to admire their different skills at jumping over the stream, putting pay to my theory that we would be safe since sheep can't cross running water. 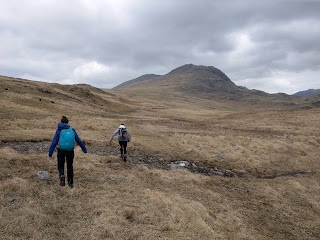 Top of Slide Side.  We sheltered from the wind on the south side of the peak, and had some lunch. 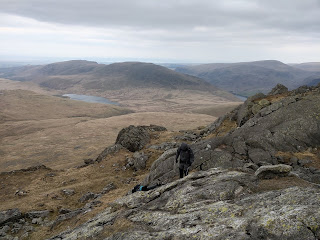 Top of Scafell, quite a windy day, but blissfully empty of people, as opposed to Scafell Pike opposite. 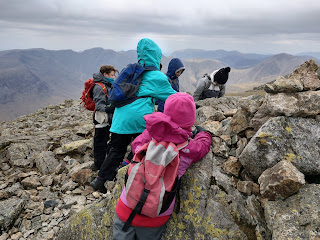 Top of Scafell, looking back towards Wastwater. 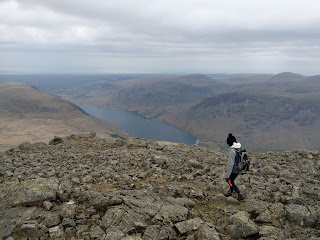 We took an interesting route back, through a scree field and then a rocky gully.  I'm not sure Caroline was totally on board with this route choice, but nevermind.  After we'd got to the bottom of the first scree field, the girls made an ice collection - picking up great sheets of ice from the still pools at the bottom, and finding ice sculptures in the stream heading down.  We were a little alarmed to see a huge rockfall to the side of the slope, with some fairly significant boulders falling about half way down the slope - it would have been very serious for anyone to be in their path.  Thankfully they all came to rest a good way off from where we were standing, and we'd all come down the other side of the slope. 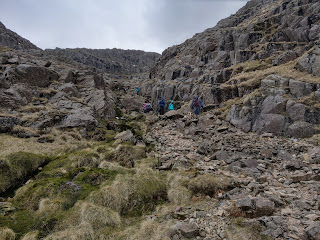 After getting to the bottom, Grace lifted our spirits by running an exercise class based on her hockey fitness training.  We had planks, agility drills, lunges, and more.  Caroline was also determined to reach some magic milestone on her watch, which was apparently complaining that she'd stopped exercising after going too slowly down the rocky gully.  So she and the girls were doing sprints and steps - it was so clearly early in the week and everyone was fit and healthy!  After a little more descending we reaching the waterfall where Grace & Poppy posed for a selfie. 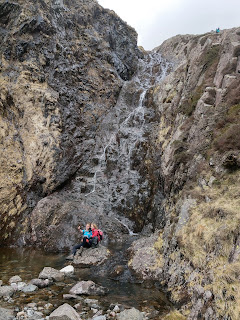 Heading back across the flat, skirting around the raised ground to the right.  Not too boggy underfoot for a change. 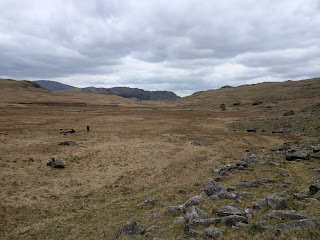 Posing (quite deliberately for Evie) on a convenient rock. 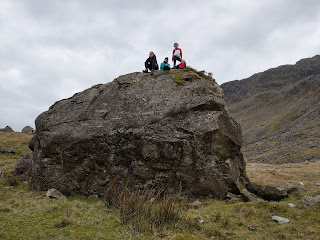