We had Scafell Pike on our sights for the week, I'd planned a couple of routes, but the evening before had done a little more research and found the route via Piers Gill, so we planned to go up this way, and back down the tourist path.  It's a little longer route up, but I'd definitely recommend this way when the weather is fine - we avoided virtually everyone until getting to the final 250m up Scafell Pike.

We parked at Wasdale Head, hoping to be back in time for a pint at the pub before heading back home (and a dinner booked at the Bridge Inn).

Beautiful sunshine and a little less hazy than the day before. 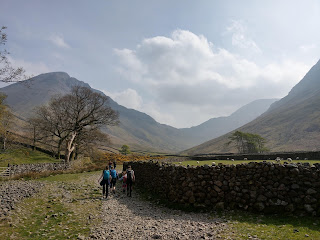 There was one person ahead of us taking the same path, but he quickly disappeared from view leaving the whole fell to us.  We found the crossing point with the arrow marked on the stone to indicate the path. 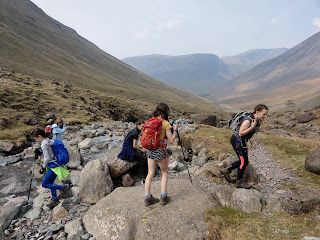 Leading up to Piers Gill. 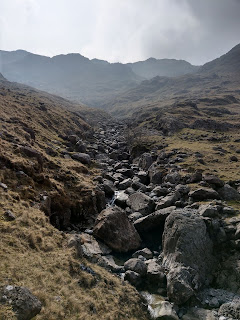 This was the start of Piers Gill (or the end, if you're water) a very impressive crevasse.  We'd seen the warnings not to attempt to walk up the stream bed, so stuck to the path on the left hand side. 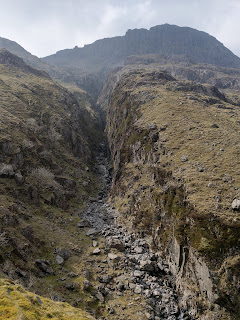 After the short stretch of scrambling up a rock face we stopped for lunch. 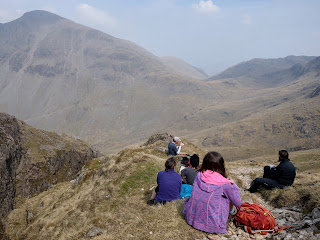 Isabelle and Poppy sticking to the path. 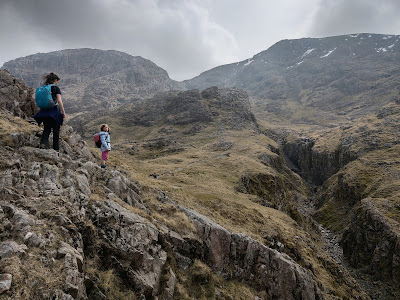 Now at the top of Piers Gill, we join the Corridor Route to the top, so started to meet some other walkers. 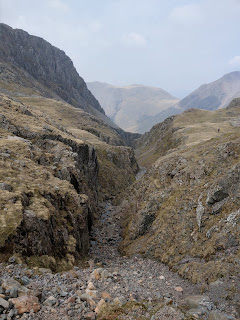 However we turned right to fit in Lingmell - we'd been up before but in foul weather, so it was great to revisit it with this view to Scafell Pike.  Remembering how hard the navigation was around here in the bad weather and just how trivial it was now was a great reminder. 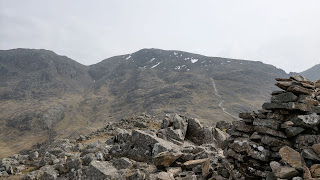 From Lingmell, looking back down Piers Gill. 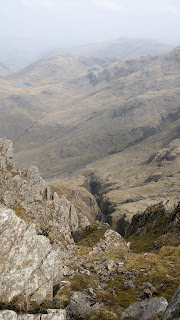 Now in fairness I think Isabelle is standing on a higher rock than Caroline in this picture... 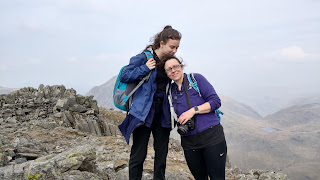 And so we crossed over and headed up the main path to Scafell Pike.  After stopping to try in vain to help a man look for his missing dog (which we'd seen but had disappeared) we made it to the top for a very rare full family photo. 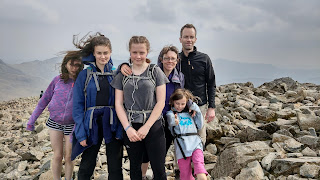 Heading back down the path for the easiest descent, the viewed opened out to Wastwater. 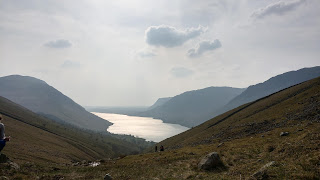 And turning right to head to Wasdale Head, we succeeded in making it back down in time for a pint before the drive home. 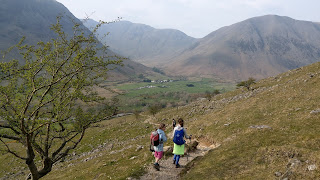