This was a walk that I wasn't at all sure that we could do, given it was significantly higher up for Poppy, not exactly short, and the weather still wasn't great.  Still, we could always chicken out of doing the high section.  Well, I say that, but know that it takes quite a lot to turn back when you're that close... 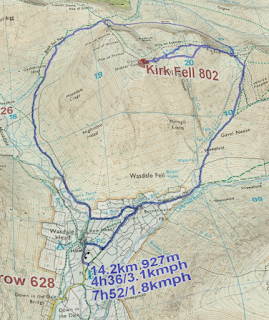 Since we knew this was a long way, we opted for driving a couple of miles up the valley to the car park, feeling slightly lazy despite the sense.  We were now walking up the valley that Isabelle had been so entranced by, looking down on from the walk on Yewbarrow.  Here's Poppy doing her best 'Where's Wally?' moment. 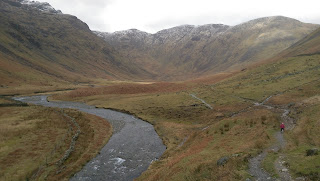 After the walking up Black Sail Pass, we tried to find some shelter from the wind to eat lunch, finding a little underneath a rocky outcrop on the direct path to the top of Kirk Fell.  It had already rained and snowed a few times by now, but held off for a quite bite to eat.  It definitely pays off to be flexible about when, where and how much lunch to eat...  Deciding that the direct route to the top wasn't going to be our preferred option, we instead decided to walk further around the base of Kirk Fell, knowing that there was the option of the path up the back. 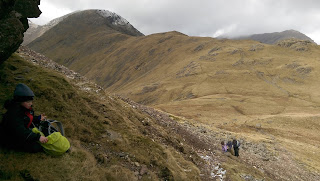 The snow showers continued, leaving us and everything covered in snow.  Far preferably to rain, just dusting off afterwards. 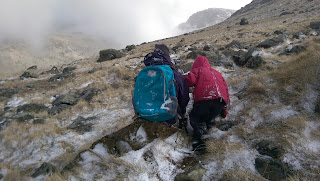 We made it Beckhead Tarn, the saddle point between Kirk Fell and Great Gable, and for some reason all the kids thought this would be a great time to try and practice stone skimming.  Well, I suspect Isabelle was far too sensible for that...  We paused long enough for the snow to clear, and (I think cheered on by Caroline) we decided to climb up to Kirk Fell. 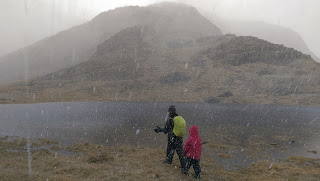 This shot just 5 minutes later shows the changeable weather, and by this point we were firmly striking up the path, Evie just stopping to relax and show off. 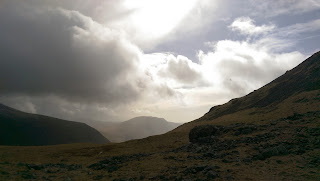 Evie just had time to relax and show off her balancing skills.  I think this this Beckhead Tarn where we were earlier in the middle of the picture, with (left to right) Brandreth, Green Gable and Great Gable in the background 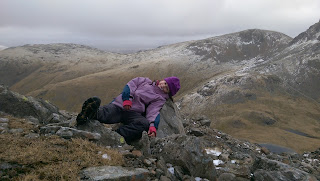 Finally we made it to the top, after quite large bog negotiation, and were really glad of the shelter of the cairn right at the top.  It was the kind of wind where standing up was really quite hard work.   Grace made a snowman up there, left admiring the view of Wast Water in the distance. 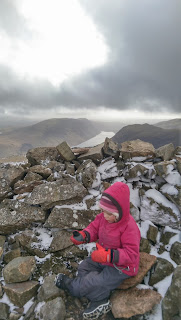 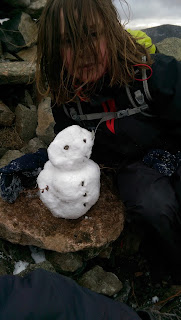 We then walked back down the same path, since it was at least on the sheltered side of the fell side, and then continued around to complete our circumnavigation of Kirk Fell.  The weather had improved a little by then, and the whole way down was glorious grassy paths and beautiful views. 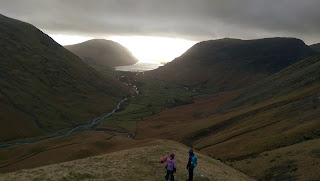