We set off knowing that this was a quite a long walk, but felt it was really worth the opportunity to do another walk from the house, get all the way around Wast Water and pick up the two Wainwrights on the far ridge. 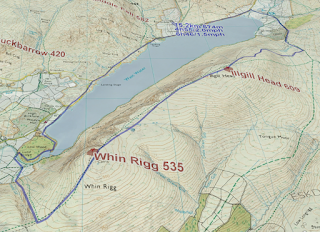 We set off with a nice walk around the head of the lake, with nice views where there was no cloud! 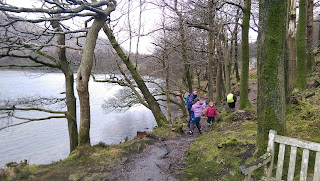 Look, no cloud at the lake level!  However, not looking quite so good up the ridge to the right... 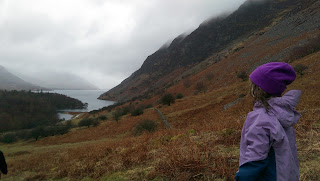 This was the last photo I took on the way up - the view quickly disappeared, the path was fairly easy to find but fairly straight up until we reached the path along the ridge. 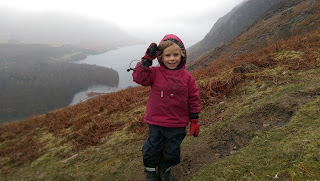 At the top of Whin Rigg it was pretty windy, raining, and not really much fun.  At this point it was actually true to say that we were better off carrying on rather than heading back, and much chocolate was awarded for forward progress.  The aim of the day was to cover up, well demonstrated by Evie - I'm not sure how she could tell where she was going, but to be honest she wasn't missing any kind of view. 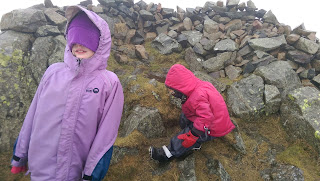 It's fair to say that it didn't get much better as we walked across to Illgill Head, Caroline was putting a brace face on it, but you can tell that Poppy wasn't that impressed.  This was one of those walks where having spare kit in your bag that you can't imagine needing turns out to be really useful. 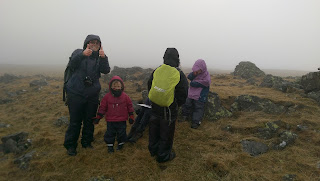 Isabelle at least was in good spirits, and checking our route. 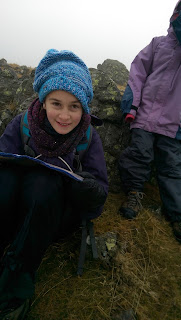 Finally as we descended from the Illgill Head we started to come out of the clouds, which was quite useful to keep track of people walking at quite different speeds! 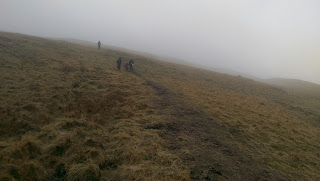 Finally we could see where we were going, heading to the far end of Wast Water, with Kirk Fell in the centre and Yewbarrow to the left of this picture.  As we knew the walk was quite a long one, but there was quite a flat section at the start and finish so everyone coped really well. 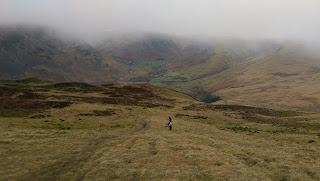