First walk of the week staying at Pye Howe, right next to the path we had failed to find previously. Given the footpath was marked from the road, we took this opportunity to start from the house and to discover where the footpath went.  We were without Isabelle, since her DoE practice expedition was scheduled for this week, her help with Poppy up and down will be sorely be missed. 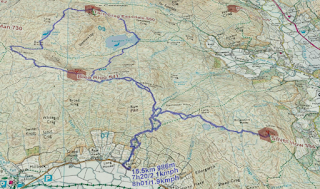 Out of the house, and almost straight up the hillside.  With little difficulty we found the stile over the wall that we had missed 2 years before.  It was pretty hot work climbing up, despite the partial cloud cover and the occasional wind.  After getting to the ridge, we walked along to get to Silver How.  Here we were able to see lots of walks we'd done in years before. 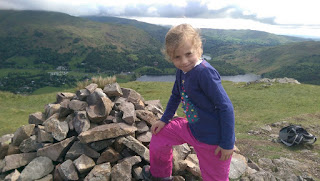 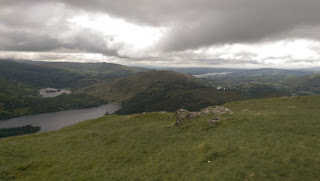 Now the sun had come out more, so out came the sunscreen.  Evie decided to focus protecting her best bits. 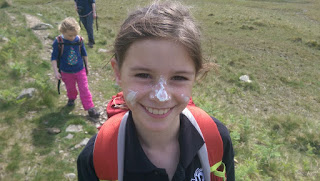 We walked back along the ridge, starting climb up to Blea Rigg, but turning off to the left before reaching it, to walk down to Easedale Tarn for lunch. 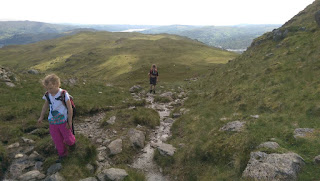 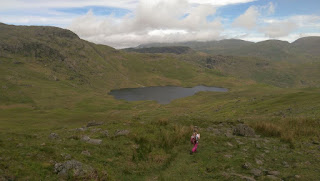 It was the start of the bank holiday weekend and there were quite a few people, but still room to find our own rocks to sit on.  Most of the walk was fairly empty of people, as we'd deliberately picked less travelled paths. 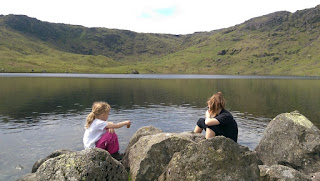 After lunch we climbed up to Tarn Crag.  This was the hottest part of the walk - full sunlight, very little wind, and relentless climb up for a couple of hundred meters.  Evie especially was quite hard to motivate, we had to time the sugar rushes causes by the sweets we'd brought for best effect.  Still, we made it to the top of Tarn Crag. 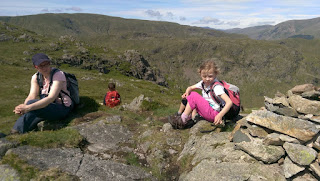 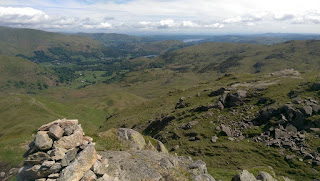 We went back via Codale Tarn, a little less descent before climbing back up to Blea Rigg, but also a slight circular walk.  After passing the tarn, we then climbed back up to the ridge on the other side. 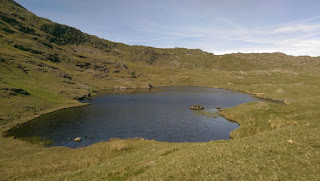 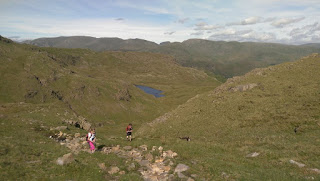 Back up to Blea Rigg, after missing it on the way out. 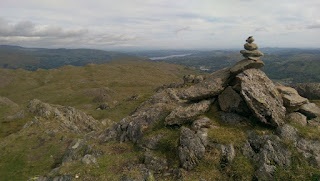 We returned, not quite the same route back down, but close enough to find the stile back over the wall, I think give it another couple of goes and we'll find it with no problems!  This was the view looking up the Langdale valley, with the Crinkle Crags just visible at the end. 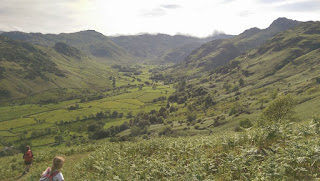