The purist would say that climing Helvellyn from the west is boring and I'm sure some say it doesn't count.  Anyhow, needing to drive back that afternoon meant we didn't have time to walk from Glenridding, and actually our target was the peaks to the south.  So we parked at the south end of Thirlmere, striking lucky by both getting one of the last three spaces and finding the ticket machine out of order.  A total of just under 15km at 5h15 was slightly more than I had planned, but that's partly since we took advantage of the great weather to visit Helvellyn. 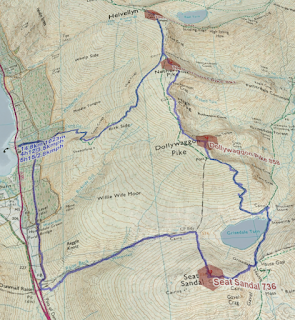 So this was the walk up - not much to say, other than we generally were overtaking people!  We also met a couple of guys in the car park who didn't have a map but clearly were on a mission to climb Helvellyn - we met them a couple of times later on and they clearly met their objective and were having a great time. 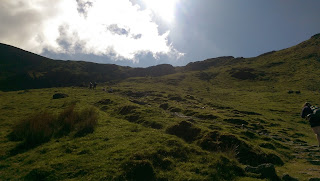 The top of Helvellyn, with Swirral Edge to the left, Red Tarn center and Striding Edge to the right.  The great mystery has to be whether we'll ever do either of these routes... 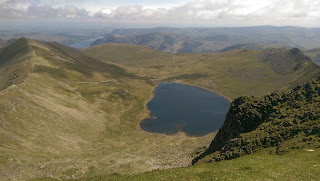 Top of Nethermost Pike, really the most impressive thing here is the view of Striding Edge!  Apart from my wife in the foreground, naturally. 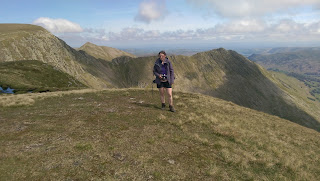 The path down at High Crag. 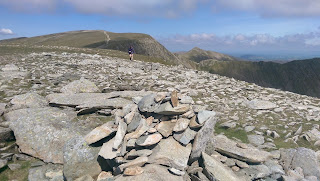 Dollywaggon Pike, looking back the way we had come. 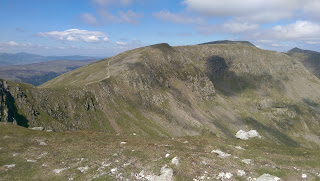 Then the long descent down to Grisedale Tarn.  We could see much of the route we had taken the day before, it was great to get closer to some of the sites we could see then.  The path down was really quite long and tedious though...  Just matched by the short but quite exciting climb up Seat Sandal - seen opposite the Tarn to the right on this picture.  We took the direct route up the left hand edge, Caroline didn't much like it, but Evie would probably have loved it... 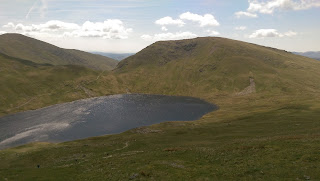 The view from the top - quite windy, with St Sunday Crag center opposite. 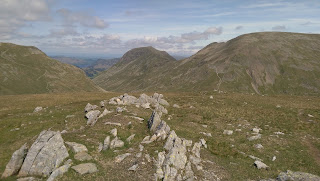 We retreated back down the valley, taking the direct route back to the road.  We then walked back up the path then forest road to the car park, and seeing two fly pasts by 2nd world war planes - a quad propeller bomber (?) then a fighter.    They were flying down the Thirlmere valley, a lot lower than the cliffs either side, very impressive, and too fast for me to get the camera out! 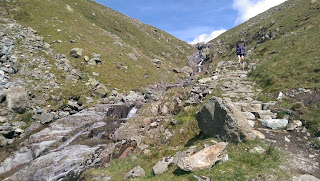