We were leaving this day, and had a shorter walk planned which had the excuse of driving over Hardknott Pass.  However, on getting to the start of the pass we discovered that some bright spark had parked on one of the hairpin bends and left their car leaving around a foot too narrow a gap for cars to get past.  By the time we got there a police car was there as well, parked more considerately, but people were having to turn around.  Given that trying to get past would mean putting a wheel over the edge onto a narrow strip of mud, and that beyond this mud was a very steep drop, we agreed that this was the best course of action.

So we came back along the valley and turned south but I knew there was a possible, if slightly easy, walk that we could do.  I'd also scouted out potential parking places by the side of the road the week before - google streetview is great - so knew there was a place to stop.  So we parked, and set out sights on the distant pile of rocks. 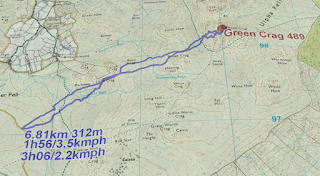 What I hadn't foreseen was that between us and the rocks was around 2 miles of bog.  Yes there were parts that were actual streams, and there were some parts that were a bit drier, but the direct route we took got a little damp at times.  Nothing disastrous, but I look at the map now and wonder if the path marks to the south east would have been a better choice. 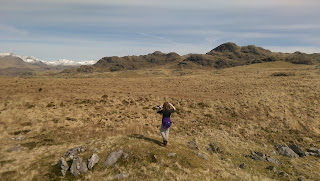 Still, nice weather, not much wind, and a complete absence of snow.  And a bit of potential rock climbing, depending on which route you chose to the top.  Here Grace and Evie are looking for their best options upwards. 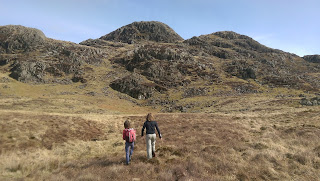 Grace makes it to the top for a well earned lunch, 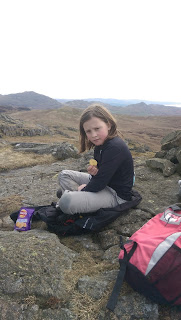 For most of this walk Caroline was on Poppy duty, so the rest of us got nice breaks while we waited for then to catch up.  After spending the previous day not letting anyone get more than a few meters away for fear we'd lose them, this was quite a welcome relief.  After all, we were going to close enough to each other on the drive back to Birmingham later on. 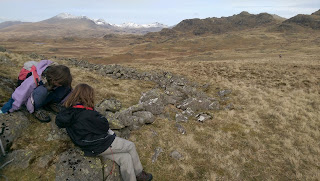