I cooked this cake for Grace's 6th birthday. 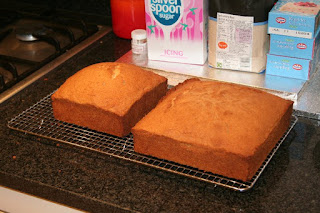 When cool, trim all the crust off the cakes, making the top of the larger cakes pretty much flat.  You then need to cut the cakes to make the right shape. Put the two larger cakes on the cake board (I used a 12x18 board) next to each other, and the two smaller ones at the top.  The front one a few inches from the front, and the back one quite close to the back of the cake.  The cake at the back at the bottom, cut the corners off and put them on top, just in front of the smaller back cake.

The front of the dog can be shaped into the two front legs, and a rounded bit in the middle for the head.  The top cake at the front loses the most, cutting it lower at the front and rounded to make the nose of the dog.  In front of this top cake I added an off-cut of cake to help make the front of the nose. This stage took a bit over an hour for me, and I ended up with something that looked like this: 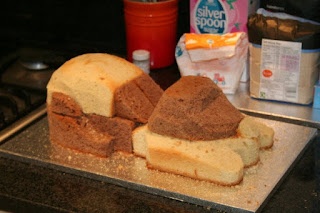 I took apart the cakes, and cut them each in half so there were 4 layers top to bottom, so I could get more butter icing in.  I make 2kg of butter icing (500g butter, 1.5kg of icing sugar) in two batches, and had some left over.  Starting at the bottom I covered the bottom layer, then moved up. 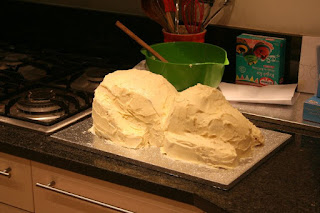 I rolled out 1.5kg of white fondant icing, and then placed it over the cake.  I didn't quite get it wide enough, so had to patch up a few bits later.  The spots can cover up small mistakes though... 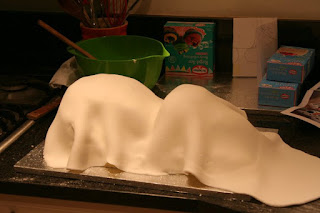 Now start arranging it so that it tucks into all the corners that you cut in the original cake.  Near the bottom cut the excess away, then work the rest together so that it doesn't bunch up so much.  I find a proper icing smoother (a bit like a plasterers float, but much smaller) really good for getting all the finger marks off the icing. 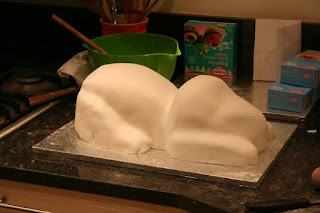 Now get some black fondant, and roll out and cut spots out of it.  I stuck them on using some edible glue from a proper cake shop, together with a really small child's paintbrush to paint the side of the icing you want to stick on. The paws have more small strips of black icing stuck on, same for the mouth and whiskers. The ears and nose are just larger spots.  The eyes could be done by piping icing, but I cut out some rolled out white icing, and stuck it onto a slighter larger circle of black icing. I rolled out some red icing for the tongue and collar, and a lump of white icing made the tail. 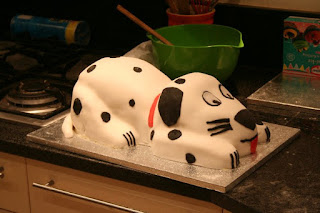