Crinkle Crags and all the rest

After completing far more peaks than I'd anticipated the previous day, this was the only walk left - we could have split it into two, but with good conditions it could all be managed in a single day.  The weather report had a chance of rain after lunch, but we took those odds.  We could always have headed back early...

Keen to avoid several miles of road walking, we parked at the Old Dungeon Ghyll NT car park.  Around the same time as the previous day, but the clouds meant lots of spaces. 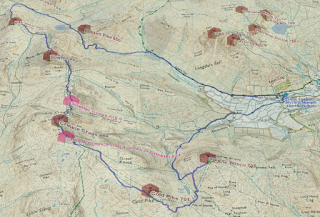 Along the valley floor, then starting the climb up, around 600m of ascent before the first peak, around two thirds of that to get to Red Tarn. 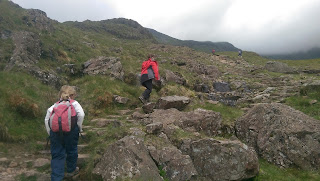 Top of Pike of Blisco, views across to Windermere, Red Tarn and the Langdale valley, and also to the Old Man of Coniston. 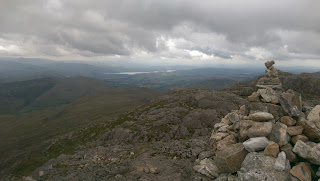 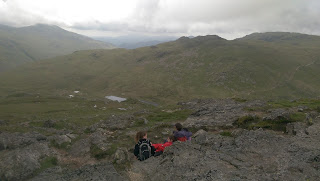 Now down to Red Tarn, and trying to avoid much of the bogs at the bottom, up to Cold Pike.  Poppy wasn't too happy - turned out her trousers were too tight, but we managed to find the actual path up to the ridge on the left - a big win over when Caroline and I had walked up here.  Meanwhile, Grace & Evie had decided on the direct ascent up the steepest route, and Caroline gamely followed them.  We were first to the top by a while...  The second photo shows the route to the Crinkle Crags. 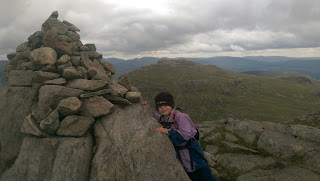 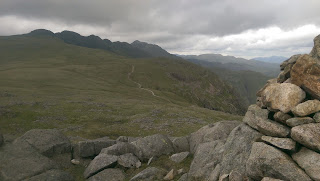 After crossing much of the distance, we decided it was lunch time, so found a sheltered spot overlooking the valley.  It was pretty windy all along the ridge, I'm assuming it's always like this. 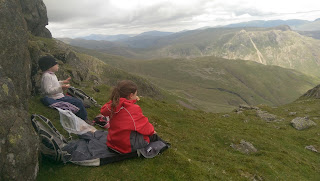 Up to the first Crinkle Crag, Evie clearly not impressed by climbing merely a Hewitt.  Still, a good view down the valley. 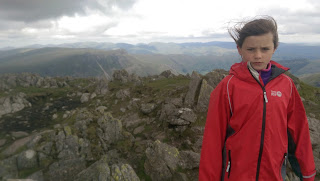 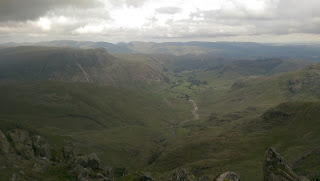 Now to the second Crinkle, looking ahead here to the walk to come - along to Shelter Crags, and then up to Bowfell and Esk Pike all the way to the left of the picture. 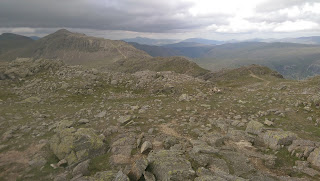 Now at Shelter Crags, another Rhubarb and Custard each to distribute. 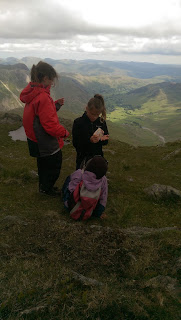 A rare non-peak shot, showing the walk ahead up to Bowfell. 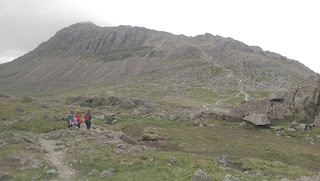 I had great memories of the diagonal slabs of rock, which weren't as large as I'd remembered.  Clearly I've just grown since last time. 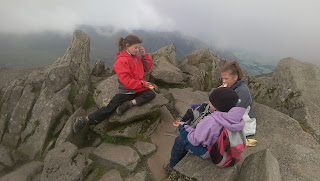 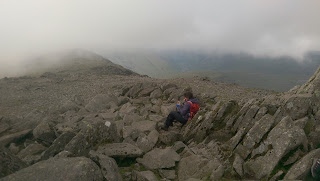 Now at the top of Esk Pike - the weather had held off, despite the cloud cover there had been no rain.  So we'd made the full walk, and had officially run out of Langdale peaks with a day to spare. 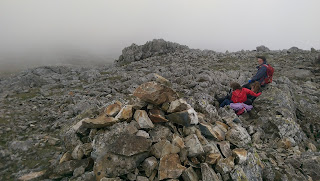 Time for the long walk back down the hill to the car. 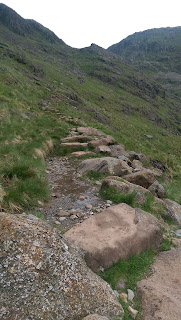