We were driving back to Cambridge, so wanted a shorter walk.  We picked this one, basically the reverse of one we'd done before, so that we would end up at Chesters for cake.

We started off from the NT carpark in Elterwater, a short drive from where we had been staying.

The weather was pretty good - no real chance of rain, but not too hot for some walking. 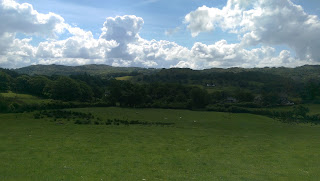 Slater Bridge, looking back the way we had some from Little Langdale. 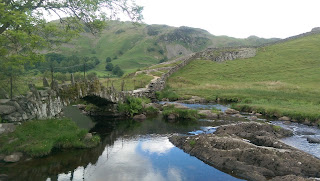 Onto Cathedral Cave.  We went in from the west hand entrance, which has a short tunnel to the main feature of the cave - a huge cavern with a higher level opening. 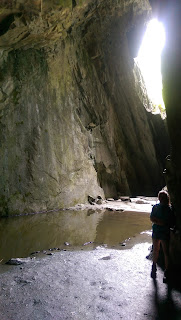 Walking towards this window led to a short scramble up some rocks so we could look in through the window.  More exploring of this area, and Grace found the entrance to the longer dark tunnel.  We had a torch, so were able to explore.  The photo below was from the flash from my camera.  There was no-one else around, so it was great exploring the damp cave puddles and having to explore to find where to go.  This tunnel led to the east exit from the caves, so we could carry on our way. 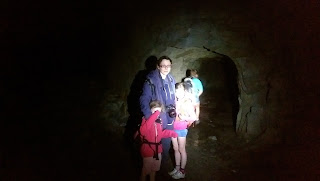 On Colwith Force, where we stopped for an uncharacteristic early lunch.  Early, so that we would have done some walking before getting to Chesters for cake.  That way we would have made some more room for cake... 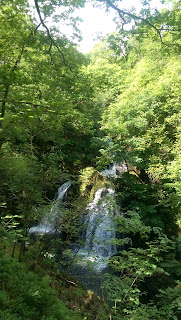 From there, onto Skelwith Force, which we visited first.  We crossed over the river on the 'new' bridge - installed in 2007, and not on my map.  Maybe it's time for a new map. 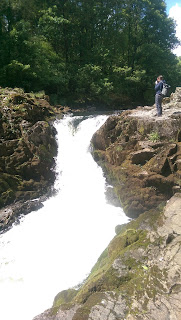 While Caroline took photos the children looked on, unaware that they were being stalked by the monster of Skelwith. 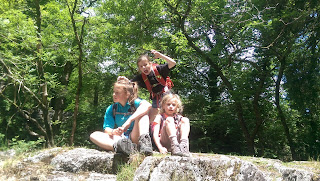 The monster turned out to be surprisingly compliant when asked to pose for a photo. 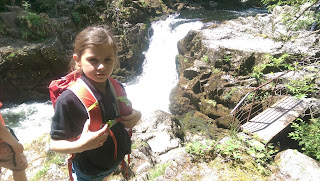 And then to Chesters, were we bought a few gifts and unfeasibly large slices of cake.  A great end to a great week. 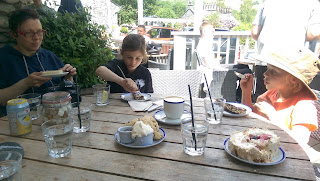