After my knee was hurting from the day before, now is the time to confess that it was actually injured from running already, and I already and proscription anti-inflammatory drugs, so I dosed myself up (I'm sure my liver wasn't that happy) and we set off for a shorter walk before driving back down south.  The weather report wasn't great, but how bad could it really be for a short walk?

We parked the car up Wrynose Pass, to be honest I had partly picked the walk since I know it was going to be a fun drive in the car up the pass... 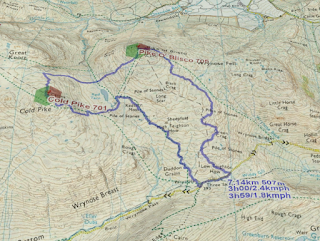 The view looking back to the car, we started up heading for the Red Tarn. 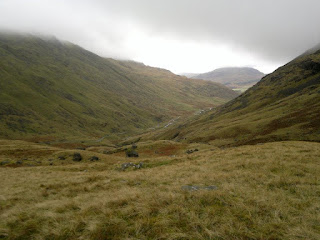 I think this is called an 'optimistic' path on the map.  This basically means that we headed straight up the fell with no visible path, but picking our way through the grass and trying to avoid the worse of the rocky outcrops.  It could just have been our bad navigation, so let's not rule out having another go at this route.  At least we got to look down to Red Tarn and know we were going in the right direction, 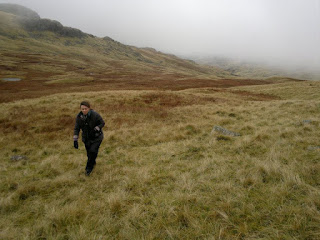 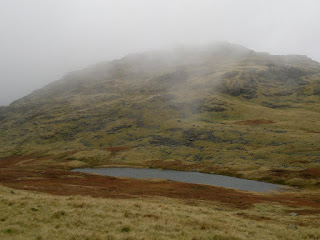 Okay, let's not beat about the bush.  The weather now was really terrible.  Very occasionally the clouds parted for a few seconds allowing you to see more than just the bog underfoot, this is the view looking north.  However the rest of the time it was not great.  The only thing to be grateful for was that we were sheltered from the worse of the wind by the hill. 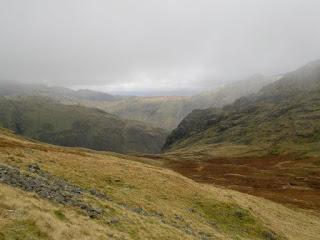 The view up to the top of Cold Pike. 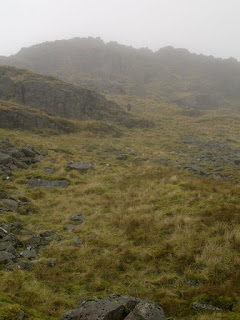 The top of Cold Pike.  At this point we hit the wind, which combined with the rain and wet slippery rocks made this a wonderful place to be. 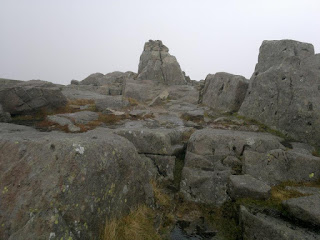 So we left pretty quickly.  We got back down to just above Red Tarn the the knee was feeling pretty good, so we headed up towards Pike O' Blisco. 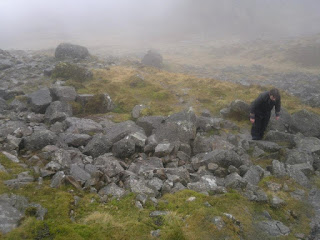 This is kind of near the top.  At this point, things were as blurred as the photo - it was great to get to the top, but better since we could start going downhill.  Finding the right path was a little challenging, but we found a way that looked about right. 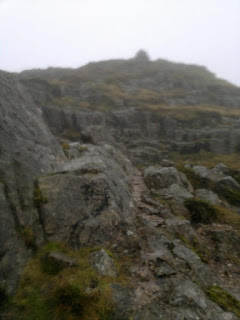 Turns out we were not quite right, so ended up having to get down from this cliff like rock formation.  I'm still quite amazed that Caroline got down safely, but it really was the better prospect than having to climb back up and find a better way down.  This is one of the reasons why I don't share the exact gps route - sometimes you really don't want to go the same way we did... 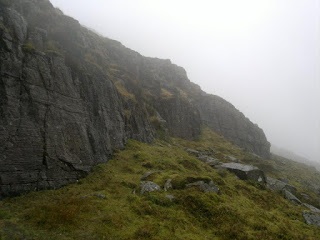 The only downside is that soon after this my knee gave out in quite a major way.  So for the last mile or two Caroline helped me down, as I leaned on her to take the weight off that leg.  I really did feel pretty useless and foolish for tried to accomplish the little that we did attempt on this walk.  Still, this photo marked a significant moment - we could see the car again...  It did occur to me that if we saw anyone trying to steal it then there was nothing we could have done to reach them in time, but thankfully (perhaps not surprisingly) no-one else was visible at all, and when we finally reached the car I was even able to drive with one dodgy leg all the way back to Birmingham. 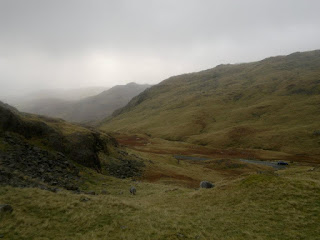