The combination of a car park within driving distance that we'd walked past earlier, and the alluring prospect of ticking off a bunch of peaks led us to this walk.

Starting from the car park the far end of Hartsop, we headed up the valley towards Hayeswater and up the hillside to the left.

After looking around the Filter House on the left of Hayswater Gill, we crossed over.  Down here it's all quite bright! 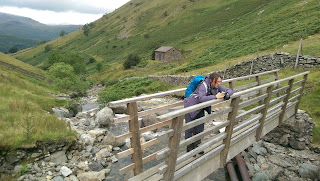 Caroline and The Knott, after the fairly steep climb up the side of the hill. 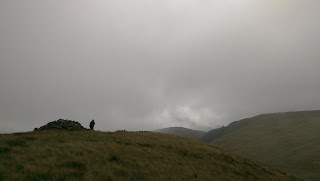 From The Knott, looking towards Rest Dodd and The Nab just getting the last of the sunshine. 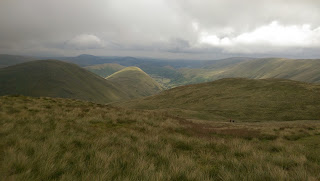 Following the Coast to Coast path, we got an advance look at Kidsty Pike, twas to be the last we had around there... 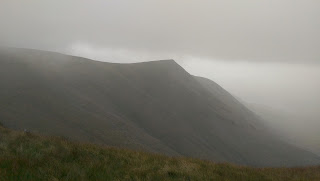 Rampsgill Head, writing this several months later I can't now recall whether this is the Wainwright or the Hewitt.  I'm guessing since it's got a proper cairn marker it's the Wainwright! 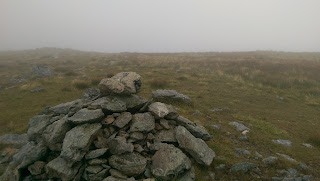 With the vain hope that conditions at Kidsty Pike would clear up we headed north to High Raise.  At this point we did have a slight disagreement about the correct direction to leave, very easy to get confused over which direction you came in from given the lack of landmarks or any kind of real slope to get your bearings.  Thankfully the compass didn't lie. 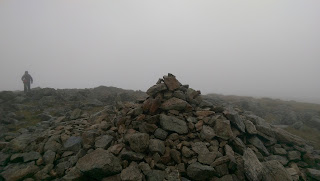 Now at Kidsty Pike, and after looking forward to the view down to the south we were sadly disappointed.  It was really raining quite relentlessly, and had been going on for long enough by now that it became easier to accept that it wasn't actually going to clear up. 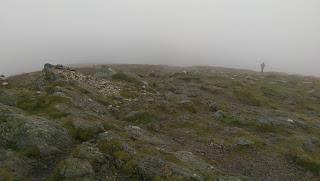 We walked back the way we had come via The Knott and then turned northwards towards Rest Dodd.  Another hour in the rain ticked off. 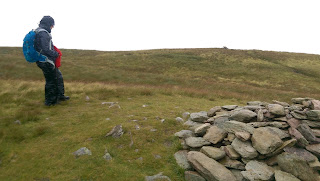 Now at Brock Crags, with some actual navigation to do - comparing the walls and paths to the map to make sure we made it safely to the Wainwright over the various lumps and bumps on the way.  Still raining. 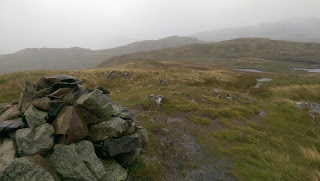 We descended, to be honest we lost the path at one point, but was able to track the route by matching the stony outcrops to the map and was able to easily rejoin slightly lower down than we were aiming for.  Coming lower it decided to actually stop raining, after raining continuously while we were above about 400m.  The sad footnote to this route is that taking this set of photos sadly was too much for my poor phone, which gave up the ghost on the start of the long drive back to Birmingham.  It was pretty sad, since we were going to listen to an audiobook off my phone.  It was less sad since I got to buy myself a new phone - which is hopefully more waterproof! 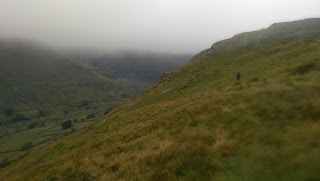